« When I went back as an adult, after many years of absence, I felt an immediate connection. »

I am a fourth generation South African on my mother’s side, and merely second on my father’s. My parents were descendants of eastern European Jews who migrated to South Africa before WWII.

My maternal grandmother proudly considered herself a South African and was also an excellent cook. I don’t remember her ever cooking what I know now to be real local South African food. My mother certainly didn’t.

As very small children, my sister and I used to sneak to the back of the yard, where Alfred and Joanna who were employed by my grandmother for 35 years, cooked their meals over a fire, to enjoy “Pap and stew” ….

Then my parents and sisters immigrated to Israel. The only South African food I was ever exposed to very occasionally, was Boerewors (1) and biltong (2). I inherited my grandmother’s love of cooking (and apparently her talent as well) and eventually became a professional cook.

At some point when I started looking into my South African roots, I discovered the food, and connected to it right away. Who wouldn’t?! It is fantastic. It is as far as I am concerned one of the most magical cuisines in the world. So I asked my mother why she never cooked any of the dishes and found out that basically she had no idea what I was talking about.

So it turns out that I, who had never lived in South Africa as an adult, had never eaten South African food, let alone cooked it, have learnt all about it, cook it, and advertise it.

Cooking, eating reading about it, immediately makes me want to go home.

The vibe of South Africa is something that runs under my skin and fills my heart and soul. When I went back as an adult, after many years of absence, I felt an immediate connection. The color of the sky, the buzz on the street, the smells, everything felt like I had finally come home.

(1) Boerewors is a type of sausage which originated in South Africa, is an important part of South African cuisine and is popular across Southern Africa. It is made from coarsely minced beef (sometimes combined with minced pork, lamb, or both) and spices (usually toasted coriander seed, black pepper, nutmeg, cloves and all spice).

(2) Biltong is a form of dried, cured meat that originated in South Africa.

Cook a bredie slowly. It tastes better the next day !

500g Maize meal – can be either fine or slightly coarser – made with either white or yellow maize. We prefer the original South African white mieliemeel, and beg/ bribe/ threaten anyone coming from South Africa to get them to bring us a few kilos…
1 liter of water
5ml salt
30ml butter/fat/oil/margarine 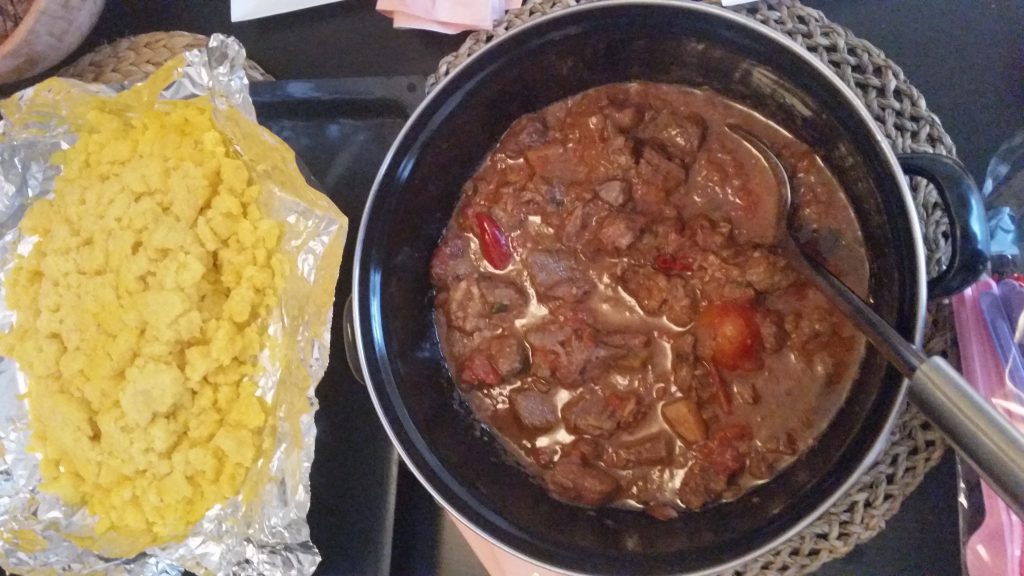 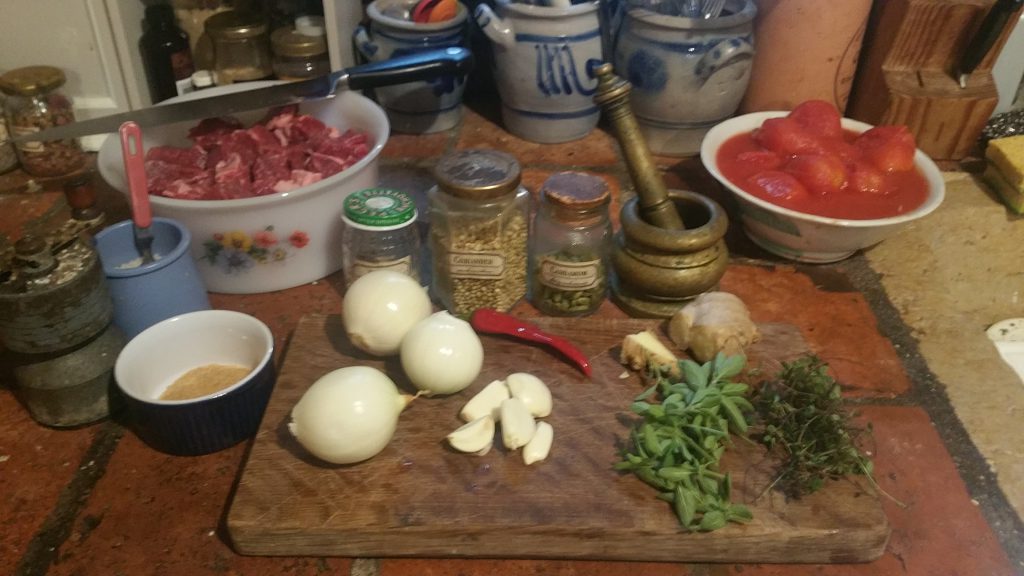