“In Arabic, sweetness and beauty merge”

I collected this story from Ahmad, a 26-year-old Egyptian asylum seeker in Geneva. A few weeks later, he left Switzerland and I lost his track. He was therefore unable to read the lines that follow.

In Cairo, I worked in a large pastry shop called “La Douceur de Damas”, whose name refers to the refinement of the country of Cham, this ancient region which included the current states of Syria, Jordan, Lebanon, Palestine and Israel.

I was first a handler then I also joined the pastry. I learned how to prepare basboussa, a very popular cookie. It is made with wheat semolina, sugar, grated coconut, almonds, pistachios, crushed peanuts and beef fat (Samnea). This sweetness is then imbibed in what is called Arabian honey, a syrup made from water, honey, sugar, orange blossom and orange zest.

To obtain a most authentic basboussa, a very precise and fundamental mixture is necessary, but its composition is kept secret by the manufacturers who produce it in the country. I therefore propose a more artisanal recipe which can be easily transmitted. 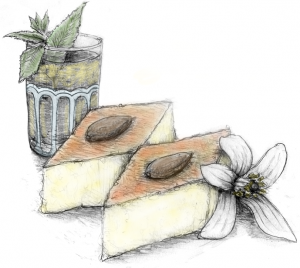 Whether day or night, the basboussa is suitable for any time and goes well with a mint tea.

In Arabic, sweetness and beauty merge. Tasting a basboussa is a unique and personal journey. There is a sensual relationship between the recipe, the one who makes it and the one who enjoys it. So I find difficult to taste the basboussa that a stranger is preparing. I’m afraid of being disappointed without this privacy !