Skip to content
Previous Next
Banana Stoba by Shulaika Girigori

A Creole Stew, served with a Hollandaise Sauce

As a direct heritage from the slaves’ cooking, the Banana Stoba is a recipe from Curaçao, traditionally cooked on a Konfó, a barbecue-like stove outside in the back of the house. It is served with a side dish of local polenta: the Funchi. 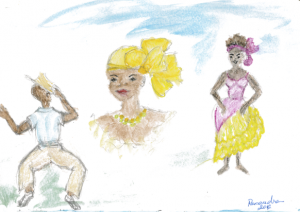 The sweet potato emerged in Peru, Venezuela and Polynesia approximately 8000 years ago. The Arawaks exported it to Curacao and it arrived in Western Europe from Polynesia after passing trough to the Philippines, China and India. The sweet potato is very nutritious and easy to preserve. The Spanish had noticed it and loaded their galleons with it for their long transatlantic crossings dispersing it in all their colonies. It was in this way that African slaves found a food to which they were already accustomed. The sweet potato has embarked on a world tour of 7500 years giving the spice route global dimensions and confirming a new idea at the time: the Earth is round.

Originally from Mexico 10 000 years ago, corn was already part of the Arawak diet. Much later, it was an important part of the agriculture of Curacao under Dutch rule.
Settlers punished slaves by forcing them to work barefoot full day in the Salines. The action of salt combined with the effects of the sun badly cracked their feet. To protect and heal their wounds, the slaves made a paste with corn our and water – the Funchi – and applied it on their injured feet. This preparation also became a staple food.
The Funchi is similar of the South African or Zimbabwe mieliepap, the Nigerian Oka based on yam or the West African fufu made of cassava, plantain or yam.

The Plantain originated from Malaysia and Indonesia and then spread to Africa. Long before the Europeans, Africans had bene ted its culinary advantage whereas the Dutch actually only used plantain leaves to shade the crops from the sun, leaving the fruits to the slaves.
Plantain starch content has the double advantage of being an important source of energy and also an excellent thickening agent for stews and sauces. This slow cooking process is also widespread throughout the world. It concentrates the flavors, tenderizes the cured meat and also gets rid of worms meat may occasionally contain.

Cinnamon is a insular spice by definition since mainly grown in Ceylon, a former Dutch colony. The cinnamon tree adapts well to the Caribbean and enables to add spice to typical sweet dishes.